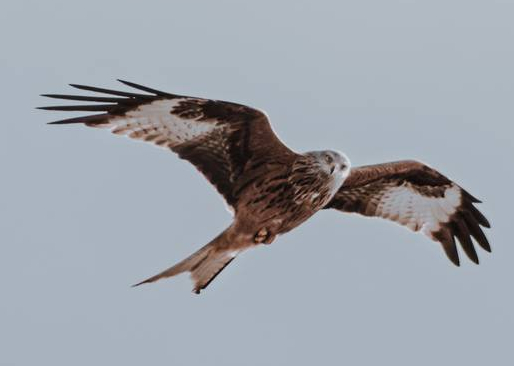 Ever since I was a little boy, I’ve loved watching birds. It started when, as a kid, I helped a friend with his birdwatching badge for Cubs and was hooked. We spent a large chunk of an entire summer wandering our local area, spotting birds and recording them in some kind of journal. I didn’t get a birdspotting badge because I wasn’t in the Cubs – too cool for school from an early age, me – but it didn’t matter. I was hooked. As a family we’ve been RSPB members for years and are fairly regular visitors to our two local sanctuaries.

I first noticed ‘our’ red kite a couple of summers ago. I think I first spotted it over our football pitch while taking training with the junior football team that I coach. I didn’t immediately know what it was, but was confident enough to hazard a guess, especially when I saw the red hue of some of its feathers in the light. I looked it up in our RSPB big book of all the birds (not it’s actual name) when I got home and confirmed that it was a red kite.

I then started to see what I assume is the same bird – I don’t imagine we have a gang of them locally – going past our house and it seemed to be around the area on a regular basis. It may go missing every once in a while, but we still see it fairly regularly. It feels like we’re forever chasing it round, in pursuit of the perfect picture, but sadly it seems quite camera shy and always seems to avoid our lenses! On the occasion I’ve written about it flew right above me while I was in my back garden. I ended up writing two poems about it, which I’ll explain later. For now though, here they are.

I continue to gaze, rapt, in awe as the light above picks out every speck of colour on this enormous wingspan. Looking as if painstakingly painted by the careful brush strokes of an artist they propel him over houses in seconds. Scanning the landscape for something there is no sense of urgency or desperation; only a calm grace that means that although my attention has been grabbed and kept, probably no one else has noticed. No call, no hovering, no swoops or aerobatics – the sky is yours and with one magnificent movement you are propelled forward and out of my sight. The memory, however, will take a little longer to leave.

A cold, wet Saturday morning’s predictability is interrupted joyfully by a shadow overhead. Spotted from the corner of my eye and then focused on fully with an upturned look, the red kite drifts majestically overhead, the king of this sky.

Given the sight, my smile is easy and wonder assured, and yet, it is momentarily replaced by a frozen, fearful gaze. We lock eyes and the hunter briefly drops towards the ground, perhaps spotting some hidden prey, but for an uneasy moment leaving me wondering if I am the dish of the day.

A gentle swat of the giant wingspan and it has passed over my head and onwards. The bird bored by the human; the human still rapt. For a second or two sunlight bursts through clouds and the kite is lit up from above, its vivid rust coloured tail and white feathers in deep contrast to the coal coloured tips of its wings.

All too soon it is gone, leaving behind a sense of loss that will battle with the brief flutter of excitement for the rest of the day.

I ended up writing two poems about the exact same thing. It was only seconds, but it made a real impression on me. Our red kite was possibly the closest I’ve ever witnessed and I got ridiculously excited. How I didn’t drop our clean washing, I’ll never know!

The first poem was written straight from my laptop – a method I don’t usually use. I’d usually scribble ideas down in my notepad first, but this time felt compelled to just write and the laptop was the first thing that came to hand. As a result it was a poem that I came back to and re-drafted a couple of times; again a process that I don’t often bother with. I’m usually happy to scribble out the odd word and leave the poem where it ends. This time though, I made a few visits to the laptop over a period of days to try and get the poem I wanted.

The second poem came as a result of not being sure about the first. So for that one I just scribbled it down in a notepad. I must have felt happier with this one as looking at it now, there are only 5 words crossed out in the entire thing.

Having read both poems back, I’m now puzzled by which I like best or even whether I’m particularly happy with either one! So while I hoped to create something that I was happy with, I’m not sure I succeeded! Anyway, I hope at the very least, I managed to get my excitement and sense of awe across. As ever, I didn’t have a camera or my phone on me so I couldn’t get a picture to remember the moment, so I hope my words do it some justice; especially as there are two attempts at conveying it! I’d be interested to hear what people think.